The toy industry has always been a hot bed of plagiarism.  Companies copy others, inspired by either inspirational design ideas or commercial success.  Page was more of an innovator than a copier, and although may have been inspired by things that came before, re-invented play patterns that have really stood the test of the time.

He patented products extensively in the UK and other markets in which he had distribution, but failed to protect his ideas in all countries.  The commercial success of Kiddicraft meant that many others capitalised on Page's ideas and innovation.  Page's passion was in the creation of the idea and he often moved onto the 'next big thing' before making a commercial success of what had gone before.

Here we list some of those who copied Page, to a greater or lesser extent.

Lego deserve a special mention, were it not for Page then they would not be one of the three biggest toy companies in the world.  They themselves continued to improve what they initially copied and created one of the greatest commercial successes of all time.  Page however deserves some acknowledgement for his part in this global phenomenon. 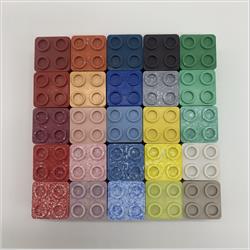